There’s actually a lot of fetishes covered in the term “Age Play.” So let’s start by breaking them down:

1. Adult Baby Play: This is when someone actually wants to be treated as a baby, including diaper changes and bottle feedings.

2. Daddy/Daughter Play: This is pretty common in the community, but not all “daughters” consider themselves to be “Littles.”

3. Littles: These are people who identify as young children, and have the fetish of being cared for by a loving parent.

4. General Age Play: Any role play where the people are different ages, such as a student and teacher.

Note: Of course there are millions of fetishes, and I can’t talk about every single one. Within the category of “Age Play,” these are some of the bigger subcategories, but this is by no means a comprehensive list. 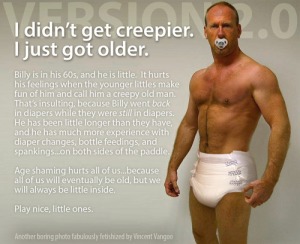 “Age Play” is an umbrella for a lot of fetishes. To begin, what is Adult Baby Play? A website called The Daily Diaper offers a lot of good insight and stories, as well as a “personals” section for hookups, (if you’re interested.)

To start, let’s understand that to role play being a baby is to get in touch with a very primal part of yourself. These are people who are looking for bottle feedings, spankings, and to be admired and cared for like babies are.

When you think about it, this fetish sounds sort of comforting. Babies do get a lot of love and attention, and we all enjoy those things, right?

Note: Some vanilla psychiatrists see this as a reaction to not being loved enough as a baby. However, I think all of us can realize that there are plenty of people with good lives and happy childhoods who are part of the kink community. The idea that there has to be something wrong with you for you to enjoy kink is really offensive to me.

So, remember not to let vanilla doctors define your ideas of people in the community. Yes, some of us have issues that we are working out. But I know that for me personally, my kink is unrelated to the issues that I am working out as a human in the world. My kink is not a symptom of “being fucked up.” I just want to make that clear.

Daddy/Daughter is often lumped in with Littles, but they are definitely different in the eyes of the people who have those fetishes. As the blog “A Little Understanding” explains, there is plenty of room for distinction.

For some, there is an element of incest involved. So, there are some “daughters” who play the molested child role and squeal “Daddy, you’re not supposed to touch me there!” The taboo is attractive to these people. However, it should be noted that not all Daddy/Daughter relationships are like this. Many sort of gloss over the incest aspect, rationalizing that they are “adopted” or some other story to disassociate the play with the idea of incest.

Another type of Age Play is the community of people who call themselves “Littles.” These are people who self-identify as children for some or all of the time. The picture above is of a Little in her room. Note the pajamas with feet, the teddy bear, and the pacifier. Littles often ask their mommy or daddy to buy them things, and they often create bedrooms that look like a child lives there. On the website Little Space Online, you can read personal ads and read message boards, if you want more information.

The important thing to remember is that it isn’t about the Sub/Dom dynamic the way that Daddy/Daughter play is. There are all kinds of Littles, but a defining feature is that they spend as much time in the “Little head-space” as they can, and don’t like to spend time in their “Adult head-space” where they are unhappy.

In a similar way to Daddy/Daughter Play, this is not a fetish about incest. Some people may make it about that, but the vast majority of the community glosses over that aspect, because it doesn’t interest them. I would consider incest to be a completely separate fetish that can occur concurrently with Little play, but often does not. 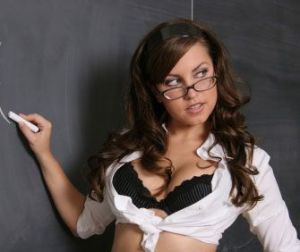 There are a lot of other age-related fetishes besides the main ones above. For example, many people enjoy role-playing a “student/teacher” dynamic. As a former teacher, I have never found this one very amusing, but I get it. Lots of people had a crush on one of their teachers in High School or college.

Most people think the Lolita phenomenon that is popular in Asia is considered a type of age play. However, all the Lolita girls that I have met are not role-playing being children, and simply enjoying dressing like them. There is no accompanying head-space for them.

Sometimes you have an age difference in a relationship that can feel a little like age play at times. A friend was dating someone old enough to be her grandfather, and while she mostly ignored the age difference, sometimes it crept into her perspective. She was the submissive in the relationship, but whenever a situation would remind her of her boyfriend’s age, she felt like the Domme for a second because she felt like she was caring for him and helping him understand a world that had passed him by.

Similarly, I am married to someone much younger than me. My son is actually pretty upset with me over this (but he should get over it because if I was a man no one would care.) I don’t often think of my husband as younger. However, sometimes I realize that he is when he says or does something, and I have a weird moment of feeling more like a mom than a wife. I try and push that feeling away pretty quickly though, because that doesn’t happen to be my kink.

So, there are a lot of things that the term “Age Play” covers, and we all have various levels of interest in various aspects of the fetishes.

Mainly, I would ask that if you meet someone who enjoys any of the fetishes above, please don’t judge. You may not be personally interested in their kink, but you should do your best to be understanding.