For most submissives, some sort of restraint is required to get them into their head space. So, you’ll want to consider your options. You can always go quick and dirt and tie someone up with gear ties. They are great on a budget and they are really effective. I use them a lot, because even after 20 years in the scene, I am not trying to be fancy.

That’s just me. You do you. But there is sometimes beauty in simplicity.

If you want to put more effort into the restraints part, you can buy cuffs and clips and go that route. There are lots of different kinds of restraints if you are willing to spend the money. Spreader bars can be used between cuffs, as well as chains. And you can always clip the cuffs directly to one another if you feel like making your sub into a pretzel for a little while.

You might go all out and make or buy furniture to attach cuffs to. Spanking benches, stocks, and St. Andrew’s Crosses can all be fun. Of course, furniture can also be extremely pricey and take up a lot of space. It’s hard to hide from children, too. Because of this, furniture isn’t for everyone.

If you can’t have furniture at home, remember to look up local dungeons online. You may find that there is somewhere within driving distance where you can try out a sex swing, cross, or spanking bench.

If you want to be really, really fancy, you can learn shibari and make tying your sub up a prominent part of the scene. This works fine all on its own, or it can be done in conjunction with installing hard points around the house to suspend your sub from or to tie them to.

Remember that shirabi can be dangerous and you can really hurt people if you do it wrong, so learn from competent professionals online or at your local dungeon.

Once your sub is restrained in the method of your choosing, you can move on to other things. If your sub is a girl, I highly recommend that you start with orgasms. People can withstand a lot more pain if they are in a state of arousal. Personally, I am not lucky enough to be one of those girls that can get off from vibration. We’re all different and that is just my cross to bear. And, since fingers are too rough, I require direct clitoral stimulation with a tongue.

Some of my favorite scenes where I was the submissive started with a few orgasms from some very devoted boys who had talented tongues. God bless all the fabulous boys and girls who love to eat pussy. You are the real heroes.

If your girl is lucky enough to get off from vibration, you have options! There are lots of vibrators on the market. However, just skip them all and get the magic wand. I have played with a lot of girls, and I know that it’s a matter of force. The magic wand has the most force behind it, and therefore it does the best job. I know some men get hung up on big vibrators (“It’s bigger than my dick and I don’t like that.”) But just get over it because her orgasms aren’t about you.

Remember: Unlike men, women only need a minute or two in between orgasms. So you only need to take a brief pause instead of a 20 minute rest. 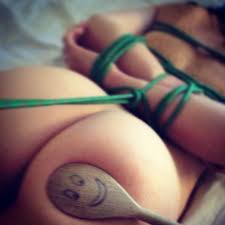 There are lots of different things that you can use for impact play. Be creative if need be! A wooden spoon from the kitchen is a totally valid toy for impact play, as are books in place of paddles. If you are on a budget or if you are traveling, you can use anything. 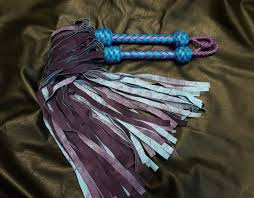 I go for simple with restraints. I like gear ties. However, when it comes to impact play, I love my whips and floggers. I think for me, the look of the toys themselves is one of my fetishes. I love the way a flogger looks draped over a chair. I love the way it looks being slowly dragged across someone’s skin. I love the way it looks flying through the air. They are beautiful toys, and from the first time I saw my first flogger, I have been totally hooked.

Remember that with whips and floggers, a steady pace and a figure eight motion is best. Start slow and gradually build intensity over time. With paddles you can also build intensity, or you can go hard and take breaks in between.

The key is really to watch your sub. I had a girl who wanted me to straight-out beat on her for as long as I could with a flogger. The harder, the better. I hit her until my arms were sore and she begged for more. However, some subs are more into the suspense than the actual pain. For them, you want to pause a lot to let them absorb the fact that they are restrained and being hit, and let them enjoy it. It’s often more the idea than the pain, so keep that in mind.

You also want to do things to push the limits of your submissive. This can mean face-fucking them until they cry. It can mean tightening the nipple clamps until they scream. It can mean working your way from inserting a finger to inserting your entire fist. Get a violet wand and electrocute them in various sensitive areas.

Your goal as a Dominant is to put your submissive into sub space. The restraints are a good start, and so are all the other toys and play. But in the end, you are probably going to need to push their limits in some way in order to really push them into the head space that they want to see.

However, within the boundaries that your sub has set, it is good to push them as much as you can so that they feel properly abused.

This can mean different things to different people, so you may want to Google and go through lists with your sub and talk about new and different ideas. 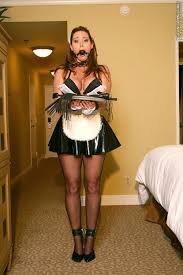 Of course the stereotype for BDSM is tying people up and hitting them. It’s what they write about in all the books. However, anything at all can be kinky if you do it in a kinky head space. You may untie your sub and tell them to serve you a glass of lemonade because you need a break. As long as they get the glass, pour the lemonade, and present it to you in the mindset of a sub, it’s still part of the scene. In fact, service-oriented subs often love the chance to make you a sandwich, pour you a drink, serve you your food, and then rub your feet while you eat.

Don’t be bound by the restraints. I know it’s easy to get that way if you learned about kink from popular culture. However, kink is a mindset. Anything at all can be kinky if you make it that way.

Order your sub to kneel for you so you can use them as a foot stool while you watch TV. Order them to rub your feet. Order them to do the helicopter with their penis if they are a boy, or to bounce their boobs for you if they are a girl. Whatever you can think of that would be degrading to them can be fun.

Remember that falling into silence is often the mark of a lazy Dom. Most subs prefer you to talk to them. For example, if you are torturing them by stretching them wide open, maybe narrate as you do.

That kind of thing can help to  make a sub feel like they are being included in the scene. Sometimes a sub can disassociate and disengage (so it’s almost like everything is happening to someone else.) Talking to them keeps them with you in the scene, and forces them to confront the things that are happening to them. That can help push them into sub space more quickly.

The most important part is After Care. Make sure that you cuddle your sub after each scene. Let them come down from the endorphins.

Once they are calm, it’s always a good idea to talk though the scene and see how they felt about various parts of it. If they felt really excited by the violet wand, but really turned off by the animal-tail butt plug, you want to know that for next time.

Everyone has their own ideas about what kind of music sets a good tone for a scene. Some people prefer classical music because they think that it is classy. Some prefer whatever music they normally listen to because music isn’t really something that they think of as part of the scene.

Let’s start with a band called element a440. You probably don’t know them, but you should.


My second-favorite scene music is definitely Faderhead. The track I wanted to embed is called “Like a Rocket,” but they don’t have a video for it. So, here’s one that’s a little more low-key but still good.

I also really enjoy some older music that still has a good sound to it. I have been a fan of Rob Zombie for sexytime since ever since.

As far as music that never gets old, I don’t think that I could ever be sick of Manson. I am an old-school Goth from way back, so I can’t really help myself. I love Manson. And all his songs make me feel sexy because I remember dancing to them at The Nile and Transylvania and other Phoenix Goth clubs when I was young and hot and awesome.

I also like to get a little harder sometimes, so I include some metal. When I am flogging someone in a soft and teasing way and then a really good metal song comes on, it makes me really let loose. Children of Bodem is my favorite, and it doesn’t get better than Needled 24/7.

I also adore Hardwire because they are really what Industrial music is all about, and sometimes you just need to feel like you are in a torture chamber in an abandoned warehouse.

I think the important thing is to think about what music makes you feel sexy and powerful. Do you love punk? Do you feel empowered listening to Hardcore industrial? Okay. Then through that on your playlist for a scene. It’ll help you get into the right headspace, and that is really the hardest part of kink for most people.